My mom loved to cook and had many specialities up her sleeve when it came to the kitchen, a few being: old world Italian meat lasagna with sauce that simmered for days, gumbo flecked with seafood surrounded by a rich roux, and creamed chicken – poached chicken drenched in full-fat seasoned cream.  I used to drool over them.  Now, it just makes my insides hurt.  However, my almost-New Year’s goal this year is to re-make them all into healthier veganized classics.  It begs be done. 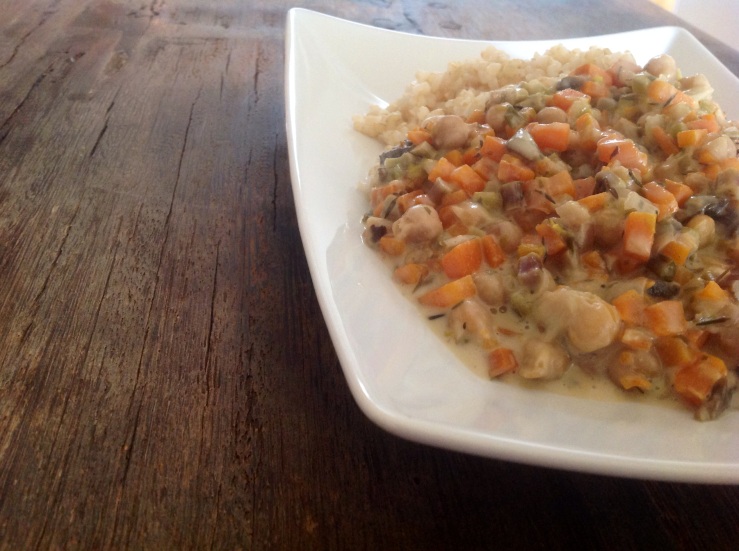 This recipe began as a vegan hybrid of Chicken Pot Pie and Creamed Chicken.  The sauce came from Creamed Chicken inspiration, and I meant for it to go fully in that direction.  However, after I added the celery, I found kale stems lurking in the back of the fridge.  And, chopped them up.  Then, I found the carrots I had planned to add, but forgot about.  And, they went in.  Then, I found chickpeas, and…  I wanted to add some frozen peas that I bought this week, but I left them in the freezer of a friend’s apartment.  It’s a long story.  But even still, they would have been excellent in here.  And so, veganized “creamed chicken” morphed into veganized “chicken pot pie” without the crust.  Mmm – pour this over rice and watch “When Harry Met Sally.”  You’ll feel like you’re ten again.  It’ll be fun. 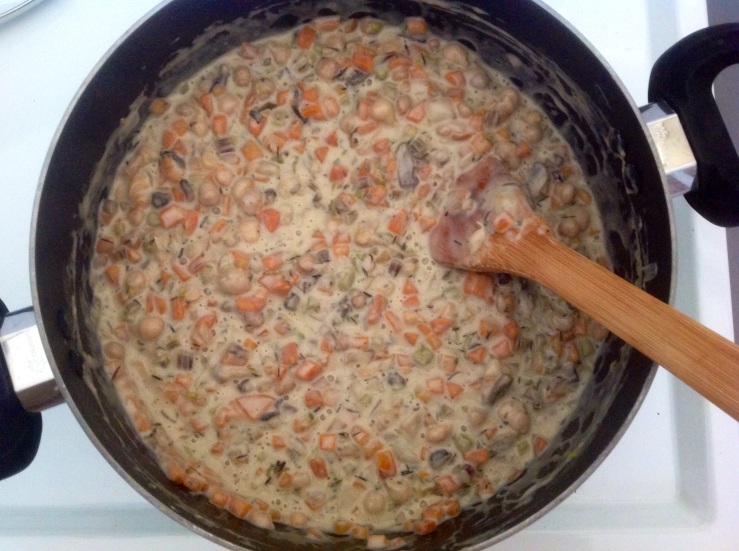 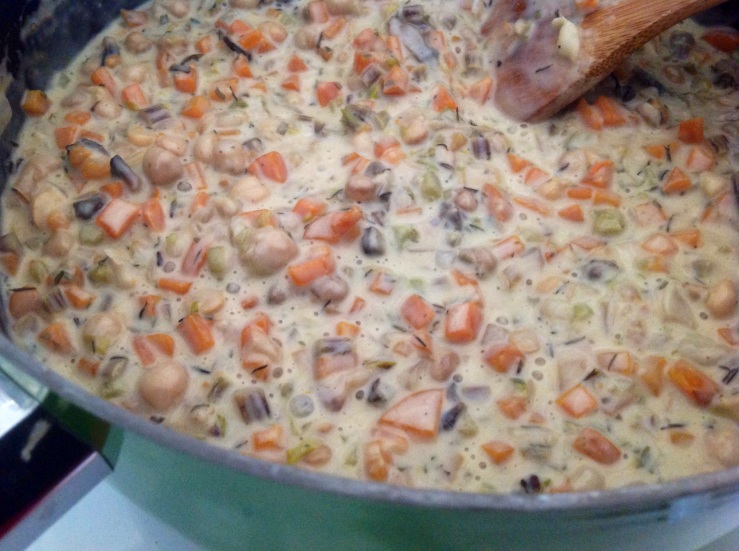 Directions: Place a large saucepan (also referred to as a “Dutch Oven”) over medium heat.  Add oil, onions, celery, and kale stems.  Cook until tender, stirring occasionally.  Add carrots, thyme, and tarragon.  Cook until carrots are tender.  Add chickpeas to the remaining ingredients in the pan and cook until warmed through.  Season with salt and pepper.

Place all ingredients for the sauce in a blender and blend until smooth.  Transfer to base ingredients in the pan, stirring occasionally.  Cook until bubbling and thickened.  Remove from heat.  Allow to cool and serve!

Sugar cookies seemed like a simple venture in the vegan world.  When I initially set out to find a vegan sugar cookie recipe, I wholeheartedly expected to find one that called for vegan butter (which I had, fortunately!  That’s probably the last time that happens.).  But, instead of finding a vegan-butter-filled flour confection, I found Marina’s recipe for “The Best Sugar Cookie” on her site, YummyMummyKitchen.  And you know what?  No vegan butter needed.

The perfect cookie in the time of a food shortage.  Or, broken refrigerator.  Or, 5 week snow storm in which any and all stores nearby or within the vicinity of 100 miles have lost their refrigerated products section due to power outage and road closures.  This cookie might just be the way to survive the apocalypse. 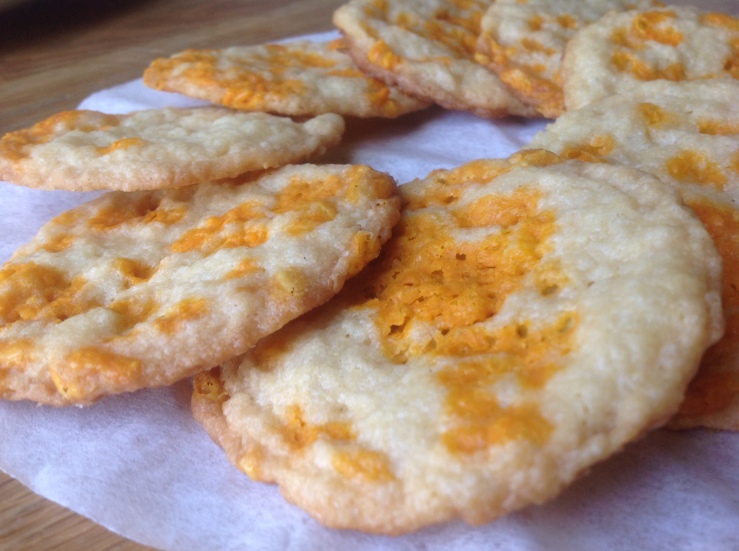 Since I had all of the ingredients for this one, I didn’t need to make any major changes to it except four – (1) when substituting a gluten free flour for regular, all-purpose, gluten-filled flour, you need to add more liquid.  In this case, twice the amount required.  Thinking it best not to make 60 cookies for the two of us, I quartered the recipe to only make a few batches.  It’s less threatening that way.  And so, increasing the “milk” addition from one tablespoon to two wasn’t such a huge leap.  However, if you decide to make the entire recipe – all 5 dozen cookies – increasing by 200% might seem a bit much.  So, start with the 1/4 cup “milk” required, then increase the amount by one tablespoon until the dough holds together.  And, (2) I subbed tapioca flour for the cornstarch and the cream of tartar.  (3) Instead of icing, I rolled the dough in orange sprinkles.  Just to be difficult.  And really, because I love sprinkles and orange was the only color I had.  Happy Halloween in December everyone!

Oh, and (4) I decreased the oven temperature to 325 degrees fahrenheit, because the initial batch that I made burnt too easily around the edges.  They (still) tasted great, but looked awful.

Note: Once the dough has chilled, it can be rolled out to make cut-out cookies, or dropped by the spoonful onto a greased baking sheet.  So easy!

One final word before the recipe: Marina, thank you for having such an adventurous spirit in the kitchen.  We LOVED these cookies!

Directions: Place sugar, salt, oil, milk, and vanilla in a large mixing bowl.  Stir with a wooden spoon until smooth (and combined!).  Add flours and baking soda to ingredients in mixing bowl and stir until combined.  Cover and refrigerate at least 2 hours. 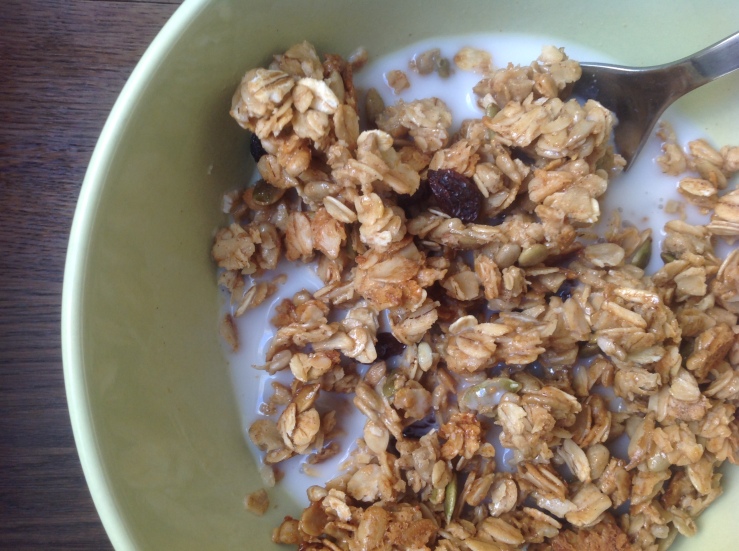 It’s almost as if I forget about granola.  I get so caught up in scrambles, hashes, and sautés that it’s not something I include on a daily basis.  On the rare occasion in early February, after a few snowfalls and a layer of cold wetness has covered any sign of life on the ground, I get a short and somewhat small hankering for cooked oatmeal – the hot, creamy kind that begs for a spoonful of peanut or almond butter.

But, December?  In California?  I’d honestly rather have some sort of sautéed kale and soup.  It just seems necessary for this region.  Warm oatmeal belongs in cold, winter mornings in New Hampshire.

As we discussed future menu plans for the week, my husband made a breakfast request.  Cereal.

He loves cereal and milk.  And, because I don’t like the intermingling relationship of cereal and milk and how it quickly turns to mush and slop in my mind (it’s irrational, I know) – I don’t necessarily revert to “Cereal and milk” plans for breakfast.  Ever.  It’s gross.

But, my wonderful husband wanted cereal.  And so, being the frugal yuppies that we are (living in San Francisco and eating sprouts!), I made some granola.  I didn’t have any sprouted seeds, and instead – used a bag of toasted sunflower seeds my father-in-law gave us, but if you have some – by all means, use them!

The addition of vinegar to granola may initially appear odd, however – along with the almond butter, it helps to add a richer flavor to the granola than just that of honey and the subtle touch of coconut oil.

Place coconut oil, honey, and almond butter in a large mixing bowl and microwave until softened, then stir until combined.  Alternatively: place first three ingredients in a small saucepan over low heat and cook, stirring continuously, until melted through.  Then, place in a large mixing bowl.

Stir in ground cinnamon, balsamic vinegar, sunflower seeds, and pepitas until coated and combined.  Stir in rolled oats until evenly and thoroughly coated.  Sprinkle with salt (to taste), and stir *again*.  Last time, I promise.

Grease a baking sheet with additional coconut oil or line with parchment paper.  Transfer “raw” granola mixture to baking sheet, spreading out to form a thin, even layer on the bottom of the pan.  Bake for 10 minutes, or until edges of granola mixture are lightly browned.  Remove from oven, turn off heat setting, stir granola mixture thoroughly, and spread granola back onto pan until an even, thin, layer is formed.  Place in oven (with heat setting turned off), close oven door, and allow to sit in slightly warmed oven for 10-15 minutes, to continue drying granola.  Remove from oven and allow to cool until crunchy/crispy and not soft.

Makes: around 4-6 cups, depending on how much you breakdown the granola.

A few of my closest relatives have an old family friend that was born in the Caribbean and makes an awesome peanut soup.  I’ve heard about it at least three times.  They talk about how amazing it is, how their friend is a chef, and how wonderful it is that it’s made from scratch – without a recipe.  And yet, it’s so good.

They’ve tried to duplicate it time and again, but it never turns out.  Somehow, it’s never right – no matter how much peanut butter is added or salt or…

I’m sure you have those moments, those connections with people that just seem to make it work, and yet… so unexplainable.  They make that beautiful meal – so flawlessly, so… without effort.  The key is: there is effort.  And, they have figured “it” out.  The recipe doesn’t need to be written down, because it’s been practiced time and again, over and over.  It’s been perfected.

To be even more intense: I’m learning through this road trip that life is like that.  That, people – individuals within a community – have learned that fine art of flawless effort and ease and practice.  And meal-making.  They’re in the career of perfecting “it,” of attempting to figure “it” out – a frustrating dance with choice and art and time.

Preparing this recipe reminded me of childhood days of helping my mom in the kitchen – making biscuits or gravy or stock.  Poaching pears, rolling cookies, testing oil for frying.  Sounds like life in the Southern US, right?  It should, because it was.  I grew up in Louisiana, making roux my mother’s way and stirring flour in a hot pan until it turned a deep shade of brown.  It was a fine art of practice and patience and wrist dexterity.

Since then, my cooking style has simplified to include a more subdued palette – one that (hopefully) draws out the individual tastes of each item added and relies on their influence and texture to create a dish; a meal.  Although this recipe isn’t quite as complex as roux-making, I hope you enjoy it, nonetheless.  Bon appetit! 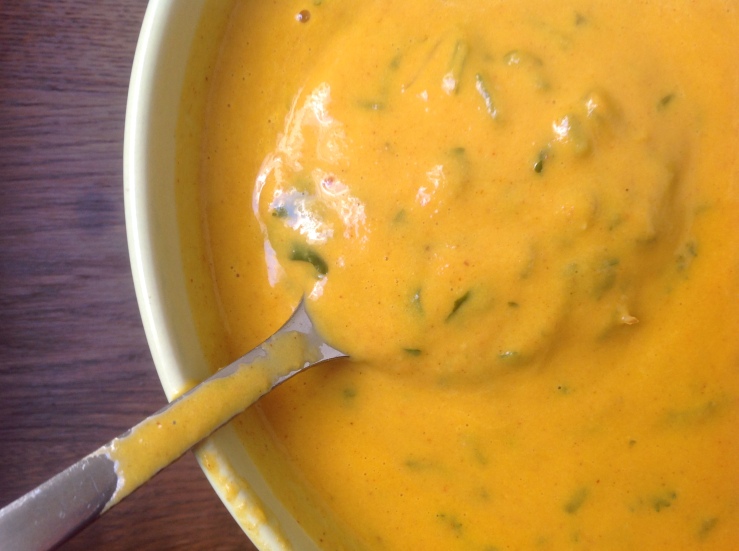 Directions: Place a large saucepan (or small stockpot) over medium heat.  Add oil and onion and sauté until tender and slightly golden brown.  Add kale stems, garlic, crushed red pepper, and 1 cup water.  Cover pot with lid and cook until water has evaporated and kale stems are tender.  Add paprika, cilantro, and 1/2 cup water.  Reduce heat to low.  Cover and cook until water has evaporated (at least 95%).  Season with salt and pepper, to taste.

Next, place peanut butter, carrots, cumin, cinnamon, and two cups water into a blender.  Pulse or *blend* until smooth.  Add remainder of water and continue pulsing/blending until smooth.  Season with salt and pepper.  Stir into soup base in large sauce pan.  Heat on low until warmed through and serve.

Note: like most soups (and – tomato-based sauces), although this can be served immediately, it tastes better if served a day after it is prepared.

I love little plates and tapas for dinner; a small bowl of this, a few spreads and flatbreads… you know, nibble food.

Last night, I made this soup – and, although fenugreek and paprika and lemons don’t exactly go together –

It seemed like a good combination.  I feel another recipe coming on. 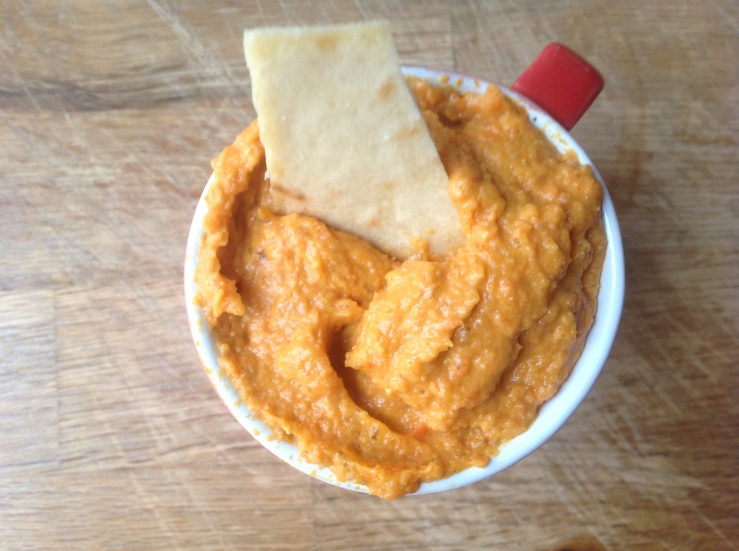 Directions: Combine all ingredients in a blender until smooth.  Serve at room temperature.  Makes: around 3/4 cup.